Sexual misconduct under this law includes:

The Garvin County Detention Center (“GCSO”) is committed to providing a safe and healthy environment for staff and inmates. GCSO has zero tolerance for sexual misconduct of any kind and will impose discipline for such misconduct, up to and including dismissal for staff and serious infractions for inmates who victimize other inmates. Incidents of sexual misconduct will also be referred to law enforcement when applicable. GCSO’s policies regarding sexual misconduct apply to all inmates, both incarcerated and on community supervision. They also apply to employees, contractors, and volunteers.

How do I Report Sexual Misconduct?

If you have information regarding a GCSO inmate who has been the victim of sexual misconduct while under GCSO custody or community supervision, please call 1-405-238-7591.

You can also report information regarding an inmate by calling CALL Rainn at 1-800-656-4673. RAINN is the nation’s largest anti-sexual violence organization. RAINN created and operates the National Sexual Assault Hotline

GCSO Inmates can also report by submitting a kite, a grievance, telling a trusted staff member, and asking a family member or friend to call the CALL Rainn hotline.

What if someone I know is being victimized?

Immediately report any known or suspected victimization of a GCSO inmate

If you are needing to call and suspected victimization of an ICE Detainee please go to https://www.ice.gov/PREAcasereview

Each year GCSO will publish an annual report regarding PREA-related incidents along with plans to improve prevention, detection, and investigation activities.

The Prison Rape Elimination Act (PREA), is provided here to educate and inform citizens of Garvin County. PREA is federal law, and if violations occurred, they would be addressed in the appropriate judicial setting. This policy is not intended to change the standard of care or the liability that is mandated by the PREA.

A secure way to send your family member or friend a gift.

A tool to make visitation easier. With this you can pre-schedule onsite visits or visit from anywhere using the free app.

VINE has been providing victims and concerned citizens with the power of information for decades, allowing these individuals to have the sense of security that they deserve. 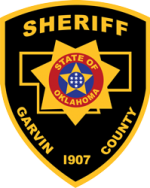